There's a wave of winemakers who are ditching conventional winemaking processes in favour of a 'less is more' approach to produce some real funky wines.

Forget your clean Riesling or blockbuster fruit-driven Shiraz. These new wines stink. They're grubby. In fact, sometimes they're so dirty you can literally see particles floating about in the bottle.

I'm talking about unfiltered wines made with the very rarest of intervention. The grapes are grown to organic or biodynamic principles; some go as far to say they're natural. I'm talking natural yeasts, no enzymes and the deliberate exclusion of chemicals in the vineyard.

Some say they're bogus wines being led by overly enthusiastic winemakers who don't know what they're doing; that it's all marketing hype. Others argue it's the wine of the future - that it's the next logical step in the sustainable paddock-to-plate food phenomena. 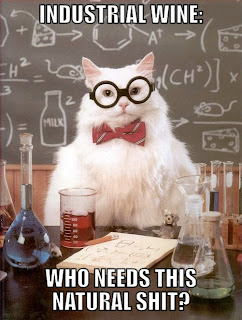 While I've heard good things and bad, I can't say I've tasted an organic wine that makes me want to gag. So far, they've all been pretty decent. At the same time, it's also very possible I haven't tasted enough.

Nevertheless, if there is one wine that's got me on the organic train, it's this baby. 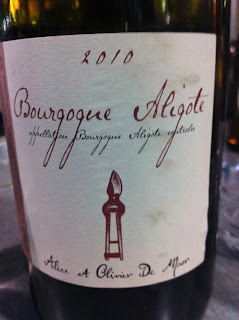 Dear God. This wine makes it hard to for me to express myself. It's actually breathtaking. Give me a second, yeah?

Based in the French village of Courgis, in Chablais, Alice and Olivier De Moor are known to produce some of the best Aligote-based wine in France. Can't say I'm surprised. Light, aromatic, textural with a good balance of acidity and sweetness, this wine is a treat worth savouring.

It's an organic vino, too. It's even a bit dirty. According to Living Wines, all the grapes are picked by hand and only natural yeasts are used to ferment the wines. Nice one.

If you happen to come by it, lap it up. Cork Wine Cafe was selling it for $50 a bottle, though I was told by co-owner Mr Travis Tausend that it was the last bottle they had. I'm crossing my fingers they get more in.

Happy drinking.
Posted by Kellie at 04:13

Hey I'm a wine scientist - but unlike your depiction of the cat in a lab coat, I'm pretty cool with trad methods of making wine - BUT

(Lab coat on now). You really need to have a control to compare it against before its niceness/greatness can be attributed to anything in particular.

It may have been just as good if it wasn't organic. But neither you nor I will ever know.

Hallo! Thanks for your comment. I certainly agree with you that a good wine can be good, without necessarily being organic. This one in particular, however, definitely tickled my fancy. It'd be very interesting to find out exactly why I enjoyed it. I wish I had a lab coat!