Wipe that wine from your smile

Tannin teeth, merlot mouth, red wine lips or simply pissed. Everyone’s encountered it: you drink some red wine and your mouth and teeth decide to declare it to the world.

I recently came across what sounds like a nifty little product. It’s called Wine Erase and it’s a mini towlette, designed to remove red wine stains, caused by the tannins, from your teeth and lips.

The packaging...well, honestly, it looks like a condom. But you can carry around wherever you go, which can only be a good thing. 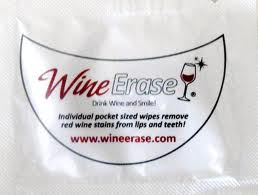 There's even a wine emergency toolkit ($6.95). Emergency! This consists of a wine stain removal spray for clothing and three towlettes for your lips and teeth. Who knew such things existed.
You can get the Wine Erase individually for 60c or in packs of 10 ($5.00) or 25 ($10.75). That's US by the way.
Curious? Visit: www.wineerase.com
If you'd prefer to go local, check out Wine Wipes: www.winewipes.com.au
Posted by Kellie at 06:29 No comments:

I recently read an article by Winsor Dobbin on the Langhorne Creek wine region, south of South Australia. He essentially described the region as an unknown gem... that the region produced some of the finest fruit which has gone into a number of award-winning wines, including Wolf Blass Grey Label, and yet the region is pretty unknown to the majority of consumers and is often overshadowed by the more famed regions like McLaren Vale and the Adelaide Hills. 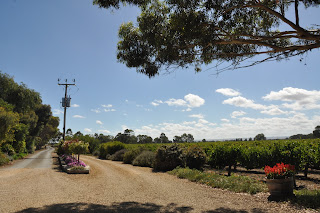 I decided to find out for myself last weekend when I visited the region with a friend for a festival called Love Langhorne Creek. The festival, in its infancy, is one of many events that wineries from the region have committed to hosting for 2012 in an attempt to paint themselves on the national wine map.

As part of the two-day festival, which took place February 11-12, wineries opened their cellar doors to the public to show off some of the new and exciting alternative varieties they have to offer. Of course they also showed off their traditional varieties, including Cabernet Sauvignon (did you know Langhorne Creek boasts the oldest recorded Cab Sav vines in the world?). 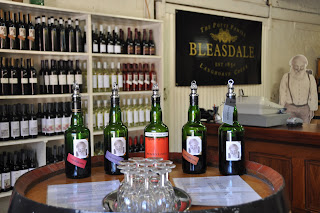 Particular goodies include Malbec (I loved Bremertons), Petit Verdot and Montepulciano (damn I love that name). Bleasdale also do a good Cab Sav. Men of Kent by Cleggett Wines is a particularly interesting wine. It’s mainly Cab Sav but features 4 per cent Shalistin.

In case you’re wondering, Shalistin is Cabernet Sauvignon – except it is white. Yes! A white red wine... Not exactly. It’s a white coloured grape that evolved naturally at a Cleggett-owned vineyard in Langhorne Creek back in 1991. In fact, the story started in 1977 when Cleggett owners Malcolm (Mac) Cleggett and Anne McLennan discovered some bronze grapes on their Cab Sav vineyard. The couple decided to propagate cuttings and, in 1991, the couple realised the bronze vines were punching out some odd white grapes.

The couple registered both unique varieties – the bronze is known as Malian and the white is known as Shalistin – and now produce wines from both, attracting interest on the world-wide circuit.

I bought three wines at the event:

Let me point out that I am in no way a wine expert. I’m simply an enthusiast with a mighty young palate. So what do I think about the Gipsie Jack Petit Verdot 2005, you ask. Well, I'd say it's remarkably different from the 2007 version and, in my opinion, much nicer. It’s not as tannic but still punches some deep red fruit flavours. I’d match this wine with a song by Dean Martin on any mild summer weeknight. 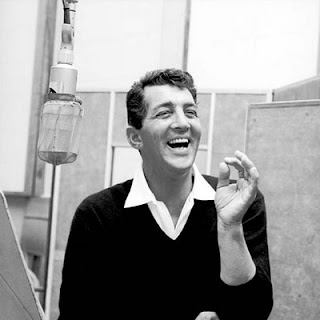 I’d also like to point out that the name Gipsie Jack (a joint venture between John Glaetzer and Bill Potts) was named after John’s dog – a Jack Russell named Gipsie, who is proudly displayed on every label. Love it.

For more information about the region and local wineries, visit: www.langhornewine.com.au
Posted by Kellie at 19:18 No comments:

A short while ago, I went to a winery by the name of Patritti. The name sounds like a fruit, which shouldn't come as a surprise given the winery pretty much makes every wine under the sun. Not the wines that get you tipsy either... 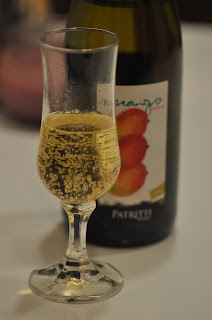 Having said, this glass of mango bubbly is having a rather fine effect. Perhaps it's just the psychology of sipping from a flute. It's the same as sucking a nicabate outside, right?
Situated halfway between McLaren Vale and Adelaide, the Patritti vineyard is the last in metropolitan South Australia that produces grapes for wine. The man behind the operation is named Geoff, who was virtually born in the winery. He has seen the industry boom and bust at its best, and has taken big decisions to make the most of his business in the hard times.
In an attempt to overcome the pain of the high Australian dollar (which has meant trying to export wine to traditional markets like the US and UK has been, well, a bitch), Geoff has looked to non-traditional markets such as Vietnam to sell big on sparkling fruit wines and juices - a move that's paid off well.
"They love the stuff," he says of the younger Vietnamese crowd.
It's an interesting move, and one I haven't come across yet. There's always big talk of the opportunities in China and diversifying options in Australia, whether it be in fruit, nuts or tourism. And of course there is no doubting China's potential. But to hear a winery doing a mix of both - fruit wine and Asia - is, indeed, refreshing. Much like this mango trickle.
Patritti Mango Wine is made from real mango fruit pulp and a premium sparkling white wine base.
Retail price: $8.50
To buy, visit http://www.patritti.com.au/
Or, if you're in the area, make a visit to the cellar door:
13-23 Clacton Road
Dover Gardens SA 5048
Posted by Kellie at 06:50 No comments:

Salut! Well, as my recently recovered blog would have it, my last post was at 2.10am on Tuesday 24 November, 2009. Goodness gosh. It's now the beginning of February 2012, and by George have things changed. Just my saying 'By George' you might suspect I've grown into the shoes of an 84-year-old man. But I tell you, you're wrong. Mostly.